In case you left the office on Friday for a weekend in the woods and are wondering why the sky is falling this fine Monday morn, Standard & Poor’s has downgraded the long-term sovereign credit rating of the United States from AAA to AA+.

What does it all mean?  How did it come to this?  As usual, the answer depends on who you ask, which might mean no one really knows, but who would be qualified to say?

The problem with taking this as seriously as one might was summed up by Ezra Klein in the Washington Post:

Standard Poor’s didn’t just miss the bubble. They helped cause it. They were paid by the banks to award their AAA-stamp of approval to all manner of financial products that were anything but riskless — which, ironically, makes them an accessory to the resulting explosion of U.S. debt. You’ve heard the old joke about chutzpah being a young man who murders his parents and then pleads for leniency because he’s an orphan? S&P has chutzpah. All the credit-rating agencies do. It’s built into their business, which requires them to assess the stability of markets they helped crash. It’s long been my position that the credit-rating agency model is broken and, at times, dangerous, and investors need to pay less attention to their pronouncements.

It makes it feel like (bad) theater, or simply a publicity stunt, but so have the actions of the U.S. government, as S&P pointed out:

The political brinksmanship of recent months highlights what we see as America’s governance and policymaking becoming less stable, less effective,  and less predictable than what we previously believed. The statutory debt ceiling and the threat of default have become political bargaining chips in the debate over fiscal policy.

Sure, it’s no longer clear who Congress is representing, but S&P shouldn’t be the source of the complaint.

As far as Ape Con Myth is concerned though, the major rating agencies showed their lack of judgment on the day they picked their names, which are all right up there with Okay Cleaners and Three Star Muffler.

Standard – 1b – sound and usable but not of top quality
Poor – 2A – less than adequate
Moody – 2 – subject to moods : temperamental
Fitch – 1 – polecat (any of several carnivorous mammals of the weasel family)

P.S.  Perhaps actors should completely replace politicians.  They know the rule: The show must go on! 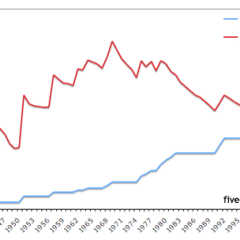 Every once in a while you run into a page on Wikipedia that never quite...

Who would have thought we’d spend the first decade of the 21st century making the...