Previously Ape Con Myth explored the history of the Dow Jones Industrial Average through the lens of the Tao Te Ching in a project known as The Tao Jones.  Given the recent activity in the market, we have returned to that work to seek wisdom, or at least some perspective and an update on a couple of charts… 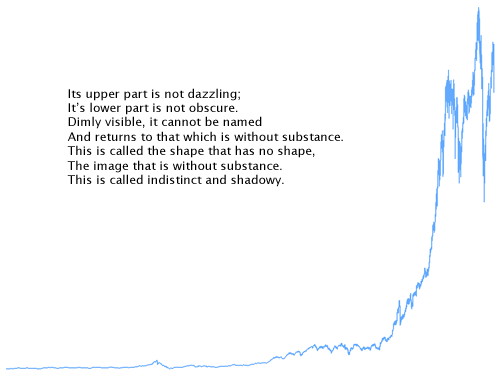 While there was plenty of drama beforehand, below we zoom into more recent history, starting in 1982 when the Dow left the 1k threshold behind after 18 years of bouncing between 800 and 1,000.  Taking the powers of ten as developmental milestones, the Dow is currently working to leave 10,000 in the dust.  It first crossed the line on March 29th, 1999.  Since then it has recrossed that line 34 times, the last just under a year ago on August 27, 2010.

Don’t be surprised if it has to again. 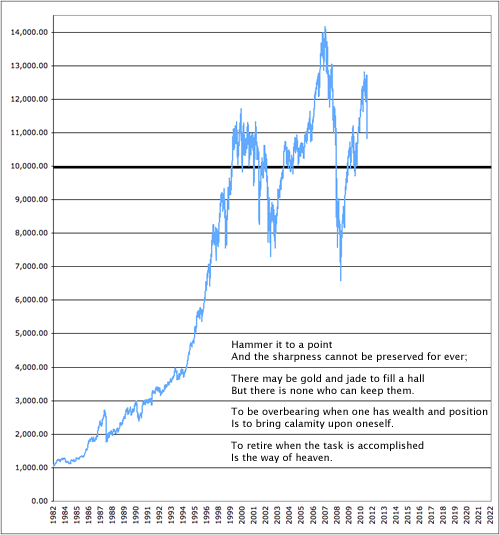 Yet, all hope is not lost!  Although they currently put the Dow around 9,500, Ape Con Myth’s ‘not-to-be-considered-investment-advice’ projections say dawn will break in mid-2013, with 30,000 waiting for us by the end of the decade.

But don’t rush to the end, start at the beginning…

From Water.org… Yeah, you’re right, if aliens visited us, this would be one of the...